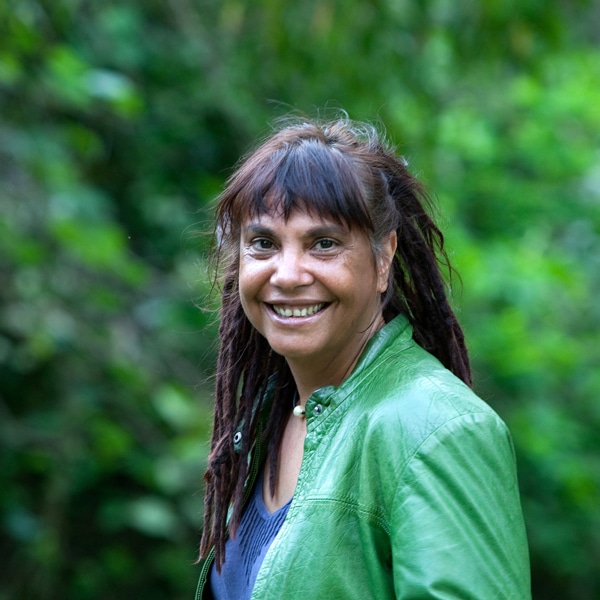 Poignant, knowledgeable and full of humour, Shellie Morris’ illustrious career has balanced being one of Australia’s most celebrated singer-songwriters with her unwavering commitment to to healing through music within communities. Armed with personal experience of connection and disconnection, Shellie imparts the importance of having a voice, listening to one another and that every individual is important. Her uplifting new single Footsteps (released February 2019) connects people through language, song and spirit.
While she has been in the spotlight for many years with her involvement with Black Arm Band, Deadly awards, ARIA nominations, Music Australia award, NAIDOC Award, G.R. Burarrawanga Memorial Award and Australian of the Year award; by and large; she works on the ground reaffirming the identity of all those blessed to work with her.
Shellie creates music and sings in around 17 Aboriginal languages, many considered “sleeping”. Since discovering her Wardaman and Yanyuwa roots over 20 years ago, she has tirelessly worked to improve the lives of Indigenous Australians, especially in the Northern Territory.
She is the 2014 NT Australian of the Year, has won multiple awards personally and for her collaborations including the landmark album Ngambala Wiji li-Wunungu and the internationally award-winning musical documentary Prison Songs. The documentary has won film and humanitarian awards around the world and was nominated for five AACTA awards (including best sound and score), ATOM Awards – Best Indigenous Resource and a Walkley Documentary Award.
Through honesty, music and her trademark smile Shellie Morris gently effects change everywhere she goes.