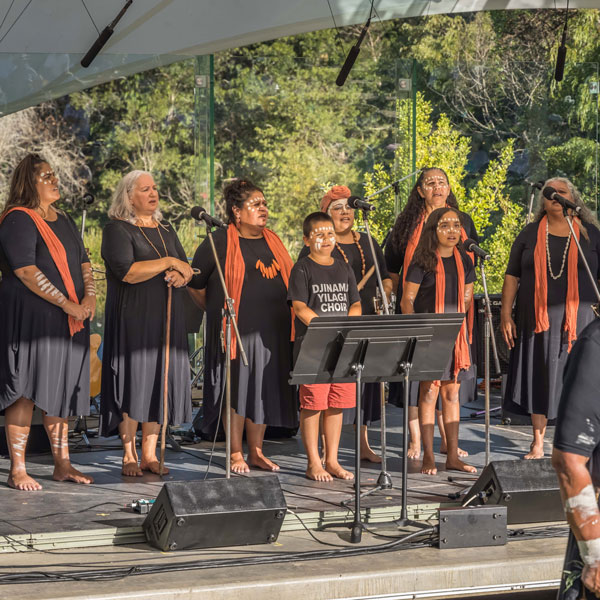 Yuin people were often multi-lingual, speaking and understanding languages of neighbouring and visiting groups. Dhurga was spoken and understood by many within the 13 tribes of the Yuin Nation. It was the dominant tongue of the Walbunga people of the Broulee region and the Brindja Yuin people of Moruya.

The choir emerged as a mechanism to revitalise language through song, following a unique pedagogy established by Westpac scholar, Dr Lou Bennett AM. The community led project, supported by Dr Lou Bennett was initially funded by the National Museum of Australia and Four Winds,Bermagui.

The choir has gone from strength to strength and is continually requested to perform at local and national events. In 2021 they performed at the Easter Four Winds Festival to great acclaim, and to a sold-out show at the National Museum of Australia. As COVID 19 restrictions lift, they are in demand.

2022 will see Djinama Yilaga share their songs with other Yuin community members and schools, along the Yuin Coast. Again, supported by Dr Lou Bennett, Dhurga song writing workshops will be held in Ulladulla and Nowra. The hope is to expand the choir, to create a mass Yuin choir and individual self-directing choirs across Yuin Country.