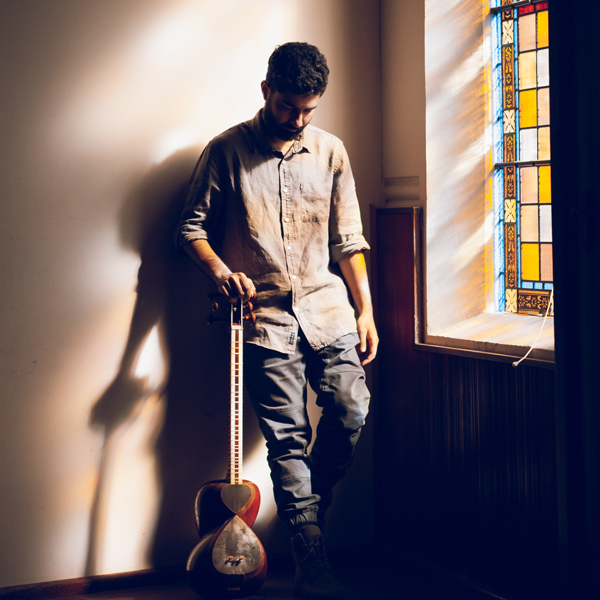 Born 1983 in Iran, Hamed Sadeghi is a world music specialist and tar, setar and oud player. A composer and producer now based in Sydney, he studied Persian classical music in Tehran and published a book ‘Ganjineye Tar’, a collection of pieces from maestro Ali Akbar Khan Shahnazi.

Hamed completed a master of sound engineering in Malaysia before he moved to Australia in 2013. He has toured throughout Australia with maestro Shahram Nazeri and Shahroz Aziz, he also tours with his band Eishan Ensemble in Australia, Taiwan and the Philippines.

His recent highlights in theatre include scoring and performing in productions at Belvoir Sydney Theatre, Kuala Lumpur Performing Art Centre, Sydney Festival and Adelaide festival . His collaborative score with Michael Askill for The Iliad (Out Loud) was nominated for the Best Original Score at the Sydney Theatre Awards 2019.

“While improvisation is central to the band’s conception, it’s the quality of the Sadeghi’s​ compositions and the opulence of the ensemble sound as much as any soloing​ that makes the music so enthralling. Despite its bright, metallic sound, the tar has a singular ability to soothe one into a state of quiet rapture, so you emerge from its spell feeling that perhaps you can survive another day, after all”

Hamed moved to Australia to pursue his career in a western country which led him to collaborate with well–known Australian jazz and classical musicians. Sadeghi was nominated in two categories at the Art Music Awards 2020 – Work of the Year and Luminary Award.